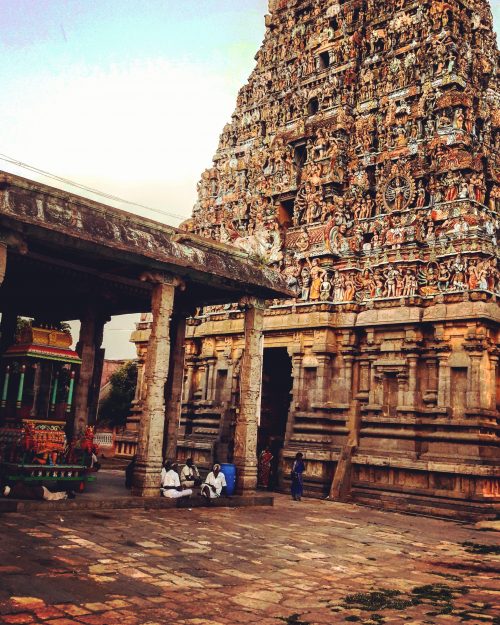 Each day of the Creator is called Kalpa. Each Kalpa has 14 Manvantaras and each Manvantara has more than 71 Mahayugas. Each Mahayuga has 4 Yugas.

The longest of the Yugas is the Krita Yuga. Its duration is apparently attributable to total adherence of people to purity of life demanded by the principles of Dharma – the Code of Ethics. From Krita to Kali, there has been a gradual dilution in observances as to righteous living. Lesser degrees of righteous living by people in each Yuga have had their impact on subtleties and duration of life. Life span is the highest in Krita and lowest in Kali. Loss of blood in Kali Yuga determines the end of life in Kali, loss of muscle in Dvāpara, loss of bone marrow in Treta and loss of spinal column (of human skeleton) brings about termination of life in the successive Yugas.

In the Krita Yuga, in the light of answers to foregoing questions, while there was a total adherence to Dharma, at the end of Krita, a quarter of the code of Dharma was not adhered to. The quarter was added on to Treta Yuga which in conformity with the nomenclature and discomtituve, could sport only a quarter less! Similarly there was further dilution at the end of Treta, and the Dvāpara Yuga displayed only a half of adherence to righteous living. At the end of Dvāpara a further quarter of unrighteous living accounted for the accumulation of three parts of adharma against one of Dharma, to characterize the quality of life in Kali Yuga. It would therefore appear that the nature of life led by people in each Yuga lead into the broad classification.

Time itself has always had a dual classification info (a) Good time and (b) Bad time. All human action was supposed to be done in good time only, to beget good results.

Admittedly, there was no question of anyone wilfully doing a wrong thing in Krita Yuga; Then how did adharma creep into the end of Krita Yuga? Unwittingly, facets of pollution crept into life with the pure and innocent ones doing good things in bad time thereby making for beginnings of accumulation of bad karmas! From time to time, in the following Yugas, these were followed by many indulging in even bad things in bad time. What if bad groups and individuals did bad things in bad time? It is clear bad karma has always been a product of people.

All scriptural texts do belong to the lore of sacred books. But Manu’s Dharma Shastra rules the roost in the earliest of Yugas. Manu’s code was followed by Yāgnavalkya Smrithi. This yielded place to Parāshara Smrithi. In Kali Yuga, it is Adi Shankara’s Code of Ethics and sacred books that are extensively followed. Norms of Dharma change from time to time – just as it is said that old order changes yielding place to new. Code of Ethics all over the world contains a lot about “do’s” and “don’ts”! They also contain details as to fruits of adherence and results from transgression.

The famous four books are:

What is common to all these four texts is that each contains an identical number of 700 slokas!

Tenets of Dharma are enshrined in each of the four texts. For quick material and spiritual benefits, one must turn to Durga Sapta Shathi. All the four texts afford an instrument for one’s moral and emotional purification – an essential prerequisite for eventual salvation.

Adherence to a code of ethics (such as Manu’s) gets the protection of Divinity and if the righteous one aspires to reach the Lotus Feet of the Lord, even that glorious end. Artha Sastra (Durga Sapta Shathi) not only offers plenty of prosperity both on material and spiritual where one’s passion for pleasure may end in passionate desire to realize the Atman. The celebrated Moksha grantha of Bhagavad-Gita is by far the most popular sacred book for all those who seek eventual liberation. These four texts have their own methods of enlightening the followers on the embellishments of God realization. Hence the relevance even today!

Good karma enhances one’s fortunate lot. Bad one brings obstacles to progress, debts and diseases, malady and misfortune! Karmas of a bygone generation of individuals and individual family are inherited by succeeding generations and consequently the ancestral lot of trials and tribulations besides a mountain of insurmountable obstacles to progress, maintenance of good health and assured longevity. Karma is a product of transgressions of Dharma! Karma reigns supreme!

The liability of a man’s previous janma,

The little particle of a lingering karma,

As manifestation of strife

The time-honored advice is that there is nothing on Earth which is not amenable to Thapas – through intense meditation, Vedic sacrificial offerings and other well-ordained scriptural pursuits. The heaviest of burdens calls for hectic efforts!

Arranged from (a) to (z) are the 26 methods known to many. Flames of a fiery burden can be extinguished by strict adherence to solutions prescribed in Rig, Yajur and Sama Vedic hymn applications and more effectively through Atharva Vedic fiery ones. A Sadguru’s Grace can extinguish the worst of such fiery burdens. Ayurveda and the herbal lore do come in handy in fighting disease and limitations of longevity. It is easy for those who desire to follow the righteous ways of living to get over odds and ends of karmic influence by virtue of special dose of Grace from Divinity – in recognition of such righteous life.

A vicious fire of negativity can be extinguished only by a corresponding fire of positivity. Diamonds are used to cut diamonds! A poisonous attack, ailment or disease is encountered by (prescribed) poisonous applications! Vanaspati Vidya, according to Sree Shuka Paramarshi, cites an example of how a cobra bite poison is to be immediately treated and cured by a poisonous herbal leaf or juice!

As long as there is even residual portion – however small or negligible – there is hindrance to realization and fulfillment. Any residuum is an indication or proof of pollution of impurity brought forward from a previous incarnation. Karmic remnants adhere to physical frame like bodily or corporeal appendage.

Even “the little particle of a lingering karma”, as pointed out in a poetic parlance, could act as a stumbling block!

The true end and aim of life is to find correct answers to the follow questions and dedicate our life to the realization of the purpose relevant to the questions:

The first question of Sri Vinayaka gives the clue to the knowledge of true end and aim of life, the implication being the necessity to know our origins – from which primordial source our individual source began! It is a clear pointer to the fact that we all emerged from the status of the Supreme Creator called “Brahman”. The answer that becomes inescapable is that we all came into existence as projections of the Brahman and dedicate ourselves to reach that state of the Brahman. The second question elicits the answer that we, as specimens of the Atman, are indistinguishable from the Brahman and if that is indeed the truth, we have to come face-to-face with that which is innate in us – to realize the Atman to merge with the Brahman! The third question underlines the paramount of reaching the destination of journey after death – survival after death to dissolve into the Brahman.

Inimical forces engendered by past karma come in the way of spiritual progress. These forces are either (i) External or (ii) Internal.

Even material progress suffers momentum and march on account of any of these inimical forces.

There are innumerable paths defined for God realization. Each religion has its own carved out path. The four Vedas, a hundred and eight Upanishads, eighteen Purānas, eighteen Upa-Purānas, teachings of Great Masters and Gurus, Grace of Rishis, Blessings of Gods underline individualistic and varied paths but unequivocally one and only one focus, namely, the one and only God – the Supreme Creator, by whatever name called!

Above all, the general consensus of opinion, as endorsed by Sri Narada Maharshi, Brahma, Brahma-mānasa putras viz, Sanaka, Sandandana, Sanathkumara and Sanatsujatha, the Sapta Rshis namely Kashyapa, Atri, Bharadwaja, Viswamitra, Gautama, Jamadagni, and Vasishta and extolled by Sri Vinayaka, Shiva and Shakti, besides Sri Shuka Paramarshi is the JAPA YAGNA in Kali Yuga for God realization.

The Hindu religion, based on its far-sighted scriptures, is a universal religion. All religions are created by one and the same transcendental principle irrespective of name or nomenclature given in each religions text. This is particularly by Shiva in “Shiva Purana”.

According to the Hindu lore, anyone not belonging to the Hindu religion can pray to God and the prayers will be answered by Shiva. It is not necessary, underlines Shiva, for any such person to indulge in conversion to Hinduism; there is no merit in religious conversion. Real conversion lies in change of heart, compassion, non-violence, fellow-feeling, purity, positive thinking and action, prayers, proper practices, devotion and surrender to Guru and God.

The Vedic proclamations are many. For example the Mysore University has adopted “Nahi jnānena sadrusham” meaning “there is nothing equal to knowledge, wisdom or enlightment.”

However, there are four such Vedic proclamations underlined by all spiritual masters and accepted by all scholars as “Great sentences” or “Mahā Vākyās”. They are:

The quintessence of Upanishads is the focus on the Supreme Creator called the Brahman and the need to emphasize the importance of knowing the true end and aim of life to realize the Brahman. How do we realize or reach Him? Firstly, we must have the intention towards attainment. Then we must know Him by understanding His qualities. Apart from His being Omnipotent, Omniscient and Omnipresent, we should know His qualities of mercy, kindness, purity, grace, immortality, benevolence, equality of vision, peacefulness, broad outlook, nearness to His devotees and to those who do not have even modicum of knowledge of Him – besides a host of all positive qualities. To know God is to behave like God. To behave like God is to become God! The Upanishadic teaching and message is as simple as that!

Any of the 18 Purānas or Upa-Purānas is sufficient to enlarge the horizon of knowledge. It contains numerous instances of how the lowest among the lowly ones, such as a criminal, prostitute, animal, bird, tree or reptile etc. attained the highest by opening a fresh chapter in the present life. Lesser beings like animals, birds etc get salvation either by removal of curses or accidental grace of Divinity. If such an ordinary or less than ordinary person can get (into material opulence and) spiritual Grace, asks the Purānic authors, cannot the cultured one – a purer one, get Divine Grace and eligibility for salvation? The culture of a civilized society is measured not by constant violation of Code of Ethics but by positive approach towards refinement. Most of the innumerable Vedic hymns were hidden from possible misuse by ineligible ones, but the discussion of such values one are still available in Purānas. It is the Purānas which contain Stotras, Sahasranama, Trishati, Ashtottarams, and valuable lines of guidance.

Gayathri as Sandhya devi is referred to as Adi Shakti and creator of the Universe. She is called Sāvithri, Sarasvathi besides Gayathri. She is also called Brāhmi, Vaishnavi, Roudri, Rakthā, Sweta etc.

There are ten distinct names (of namāvali) given to her and can be part of one’s prayer or puja in order to attain bliss through a brief exercise. Accordingly She is worshiped as:

This site uses Akismet to reduce spam. Learn how your comment data is processed.