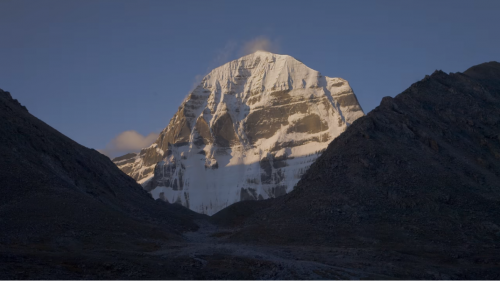 For a devoted disciple, the Sadguru will do anything to bring him up to His own high spiritual level. The disciple on the other hand looks upon his Guru as an embodiment of everything- all knowledge and enlightenment; he believes in the implicit seva or service of the Guru and approaches his master with total surrender. The Guru looks upon the shishya as a reflection of His own Atman; the shishya looks upon the Guru as his Brahma Atman! This indeed is the silent nature of sacred communication between the two! By questions and answers, the Guru goes on enlightening his wards constantly.

What is it that came out first at the time of creation? A shishya asked his Guru. “Raise your next question!” suggested the Guru.

“A man struggles in life due to karma engendered by sin.  Did karma come first or the sin?” was the third question. The Guru asked him to put the next question also. The next question was an intelligent one!

“I will put the fifth question myself!” said the Guru! The mystery of the tree and the seed was the subject of much uneasy speculation among the wards.  “How can a tree originate without the seed?” was the baffling question confronting the shishyas’s mind. The Guru knew the problem!

With power in His eyes, He created a tree in a fraction of a second! Said the Guru, did you see? How the tree come up without the seed? There is power transcending both the seed and the tree and the territorial barriers of the universe!  The difference between two such sources in the universe is attributable to difference between ignorance and enlightenment.

The Guru then went on to explain to the disciples how Lalitha Parameswari assumed the role of “Brahma rupa(265th Nama in Lalitha Sahasranama ) and how She has been the source of all sources.

Some of the methods are:

“ Let noble thoughts come to me!” declares one of the quintessential hymns of the Veda.  The reciprocity of reactions depends upon the mental reflection of the individual. Man is a creature of the mind and the mind marches in all directions like a restive horse! “Mana-eva manushyaanaam,  karanam bandha-mokshayohu”! is the verdict of the scriptures. The underlying idea behind this generalization is that the mind is the causal factor for binding one to bondage or promoting one to the ultimate stage of salvation. Whatever may be nature of the man – high, low or average; a duty is inevitably cast on him to control his horse called the mind. Reciprocity follows the pull of the horse under control!

There is! Absolutely too! The need is more in Kali Yuga than in earlier Yugas. God used to present himself in antique days before the devotee in response to his prayers. But in Kali’s days, because of the preponderance of sin, Godhood as the Supreme entity has chosen to remain invisible. Being Omniscient and Omnipresent, God is aware of one’s communications and prayers. In order to make His presence felt, God has chosen to act through a human medium, familiar to many in our times. He is as close to devotees as He would have been if He had been physically or visibly present!  The powerful revelations of the inner voice of God through the human medium speak volumes for the kind nature of Divinity but also for the quality and eligibility of the devotee. The medium is indeed a boon and a necessity between the two! The medium acts as a Guru of an inestimable value and guide to the devotee.  There is another medium acting equally as a Guru of immemorial antiquity called “Nadi-grantha”and the Divinity of Gods and Rishis acting as manifestations of Divinity through the writings on the palm leaf in self-luminous letters and sentences- for the benefit of mankind as the Nadis proclaim. Those who have manifested as authors of Nadi literature works principally are 18 in number, namely 1. Surya

besides Sri Shuka Paramarshi, whose Nadi is a superb one of indescribable dimensions. Their Moola Grantham leaves are of very great antiquity and sanctity- leaves of which cannot be destroyed by water or consumed by fire! Readings from them keep changing according to the individual and his questions.

God did not create impure people. Long after creation, it was man himself who acquired a bad lot called “karma” on account of misdeeds. Such people are the ones whose vision is hampered by illusion of ignorance or delusion by dark deeds. They are also not aware that God is approachable even now through the personal impersonal medium described above. Many who have made use of the Divine medium fall a prey to their own disbeliefs or penumbra of suspicion and withdraw themselves from the glorious opportunity of making their life sublime.

The various methods of communications and mediums are known to guide people far great spiritual prosperity by proffering material benefits as adventitious advantages! The initiative lies in the seeker after truth to grab the golden opportunity created by God.

“Sadhu Sajana Santapam kim-ascharyam kula-kshayam”? is the question from all great Rishis -meaning – What wonder is there if one’s tribe withers away if one hurts or damages the feelings of the righteous and virtuous?”

If the above is negative action of an objectionable nature there is a positive approach that conquers and captures the Gods! It is:-

Communication may be in any form but the negative and positive aspects place the negative one’s interests in serious jeopardy while the positive ones bring one close to Divinity.

There are no merits in destructive thinking and no demerits in creative thinking! Creativity is the Omnipotent and Omniscient realm and portfolio of the creator. Destruction is the portfolio of the antagonists of creation like the rakshasas of old! Today all those who nurture sadistic instincts, criminal propensities , warring nations, antagonists of culture and refinement, destroyers of civilizations, not to exclude the terrorists and terror groups who enjoy committing dark deeds at the expense of the good, innocent and righteous- are all those who are blindly carried away by destructive thinking – to merit the most opprobrious of epithets!

Time reigns supreme and time factors are controlled by the administrative medium of the Navagraha movements relevant to Vedic Astrology.  It is the Vedic injunction that not only all events should  be commensurate with the best of planetary configurations but that such important events in life be planned also is good time. For example, a marriage should be solemnized on a good day approved by time honored astrological rules of thithi (lunar day), Vara (day of week) and nakshatra (approved star/lagna time) and the most important norm of panchaka;  further the finalization of such an event should be discussed , planned and fixed on an equally good day and time.

Mantra is the surest way to reach God. The word “MAN-TRA” is coined from the first three letters of MANANA and TRANA. “Manana” is suggestive of mental repetition and nurturing of the mantra while “Trana” means the energy acquired from such repetitive exercise (like magnetization)

Manana and traana in harmony join!

Manana of mantra is the first

Mental repetition is a must!

Traana of mantra is culture

Energy imparted by its nurture!

Magic of mantra of six letters

Key it is to remove fetters!

Fetters are the family bondages

And the physical appendages!

Mantra is the means to liberation

If it comes from Guru’s initiation!

Mantra is sound body of deity

To achieve visible form with piety!

MANTRA is the means of establishing communion with God; it is a prayerful vehicle of expression addressed to God.

YANTRA IS A METALLIC PLATE (or other medium) containing the mantra or syllables thereof with a diagrammatic representation (written or carved thereon) and addressed to the deity of the Mantra (e.g., Lakshmi Yantra) The plate radiates energy.

TANTRA is the secret love to the doctrine that unfolds the key to the summum bonum of all knowledge relating to creation-sustenance and dissolution.

This site uses Akismet to reduce spam. Learn how your comment data is processed.